YOU HAVE NO EXCUSE NOT TO EXCEL IN SCHOOL 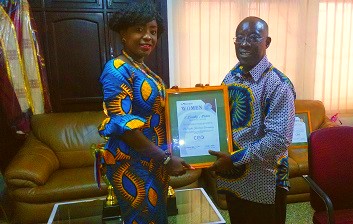 The Dean of School of Nursing at the Wisconsin International University College, Dr Angela K. Acheampong has said female students have no excuse not to excel academically as they have the same opportunities as their male counterparts.

She said, the era where male students tend to do better than females should be a thing of the past as the education system does not discriminate.

She urged female students to take advantage of the opportunities available in the education system to compete favourably with the male counterparts.

She said, unlike the past, both male and female were now given the same opportunities and therefore, females have no excuse not to climb the academic ladder to the top as the males.

“There is no discrimination between male and female in the education system and young girls must put themselves up for the opportunities available to excel,” she stated.

She was speaking on the back of her recent awards at the Pan African Awards; Regional and Country Winner, The Most Influential Women in Business and Government.

“The play ground is levelled and the onus lies on the individual to stay focused and make it to the top as there are no shortcuts to success,” she stressed.

She said, young girls must desist from exposing and carrying themselves as ‘Slay Queens’ but remain in school for academic purposes.

“The internet and social media is there for all to use but young girls must use it for the right benefits such as acquiring knowledge instead of engaging in illicit activities,” she added.

Personally, she said, she does not engage in social media activities but her exploits had been recognised from far and acknowledged with the awards.

“That means that no matter how far one is, your works could be recognised by people far away. This has also inspired me to do more for the school, community and the country at large,” she added.

After winning the country and West African award, she was optimistic that she could win the continental prize when the event comes off in March next year.

Vice Chancellor of Wisconsin International University College, Prof. Obeng Mireku congratulated Dr Acheampong for winning the awards adding that, she had made the university proud.

“The university management is proud of Dr Acheampong for her achievements. She has been very diligent and hardworking and a role model for all female students and young people,” he stated.

He was optimistic that Dr Acheampong would win the continental prize and urged her to continue to be a trailblazer and set good examples for others.