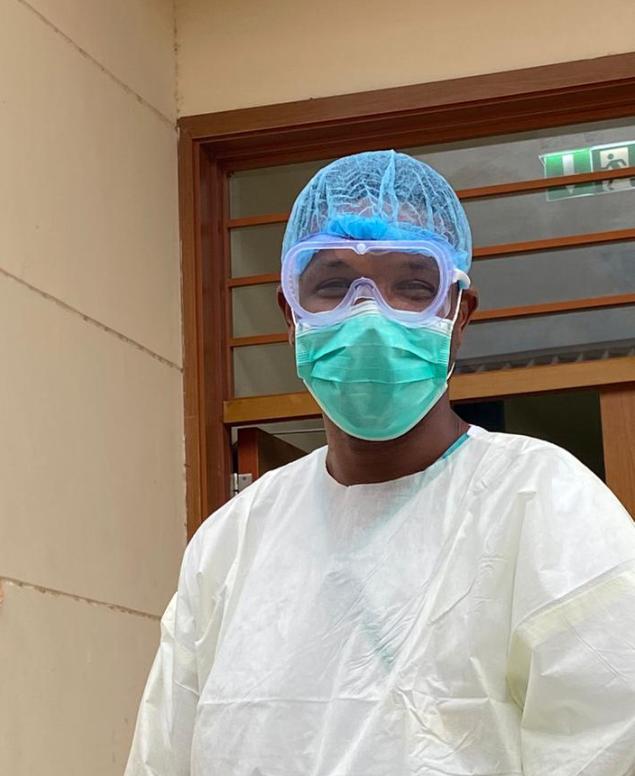 The outbreak of the novel coronavirus in late 2019 seems to have wrecked more than expected with infection rate hovering over 2million while taking the lives of over 200,000 people. To many, this is a war with an invisible enemy with health workers serving as the frontline soldiers doing their bits to prevent a global annihilation of the human race.

But for one of the soldiers on the frontline of the fight against Covid 19, it is a moment of pride knowing he is sacrificing just so others would live.

Mathias is a level 400 General Nursing Student of the Wisconsin International University College Nursing School. Like many of his Wisconsin colleagues spread across isolation centers in the country, he is serving 12 hours shifts (and sometimes more) at the Ga East Municipal Hospital in Accra, one of the dedicated centers to deal with patients diagnosed with Covid 19. Mathias’ shift involves a constant interaction with patients suffering from the Covid 19, rendering direct services such as administering medication to the over 200 patients that his facility manages and treats, obviously a terrifying experience every day.

According to him, his most terrifying moment came when his facility recorded their first case, one that came earlier than they had anticipated and had to face headon. He added, but for the empowering words of his Dean at Wisconsin University Nursing School, Dr. Angela Acheampong, he may not have been able to overcome the fear in the midst of growing infections and death among frontline health workers around the world.

Coming face to face with the virus on a daily basis, Mathias said his experience is one that is a humbling service to Ghana and a learning curve. With the number of cases in Ghana soaring every week, Mathias said, the number of patients overwhelmed their staff strength at a point, which he attributes to lack of adherence to laid down protocols adding that “patients of local transmission generally do not comply with instructions such as precautions, medications and sometimes overzealous about meeting their families”. He however said most skills he has acquired while at Wisconsin such as therapeutic communication, emotional intelligence come in handy whenever he is encountered with such situations.

Mathias admitted that one thing that keeps him going is the widespread appreciation of the contribution he is putting in the fight against the Covid 19 by the Wisconsin International University College and the encouragement by the university remains one of his highest moments which urges him on even in his lowest points in line of duty and remains positive that Ghana will soon overcome scourge of the virus for life to return to normalcy.